Messages started popping up on UO.Stratics.com from players who were losing rubble, then this was posted on UO Herald

There is an issue with rubble in Magincia. Please do not lock down your rubble in Magincia until further notice, or it will disappear from your house. We will have a fix for this issue shortly, thank you for your patience.

That has now been addressed and if you lost rubble, you will need to follow these directions, also from the UO Herald:

We have researched and discovered the reason Rubble is being deleted in Magincia. This issue will be fixed after your next maintenance on all shards. Until then, please do not do not lock down your Rubble in Magincia.

If you have lost Rubble, please send a list of lost items to barmstrong@ea.com along with your account name (no passwords), shard and your lot number. These items will attempt verified from a back up of your shard and your items will be replaced. Please make sure to lock down a container on your steps if you do not have a mailbox so we can drop these items into it.

When your items are replaced you will receive a confirmation email stating so.

Some shards – Legends, Great Lakes, Catskills, and Siege Perilous, had an issue with the Writs of Lease that were awarded in the New Magincia lottery. Some of the information was wrong, showing “Area 51” among other things on the Writs of Leases. This was also fixed this afternoon:

The shards Legends, Great Lakes, Catskills and Siege were taken down this afternoon to fix an issue with the Magincia Lot tickets not identifying themselves correctly. Remember you can not do a character transfer till after the next maintenance on these shards.

Publish 70 is now live, and the client patches have been released. The first thing I noticed – a 92MB patch for the EC. This is only part 1 – I’ve got quite a bit more to bring you, but have to step out for a bit. The second thing I noticed, there were no NPC shops, other than the Inn and the Fishing and Shipwright’s guild, plus the bank.

I was lucky enough, along with quite a few others, to run into Lady Mesanna, Associate Producer for UO. Phoenix, the Lead Designer for UO, was also on hand, answering a few questions. Among those answered – there will be a pet bonding gate installed in New Haven, and according to Phoenix, the idea of a way to search vendors has been discussed, but is not currently being pursued. 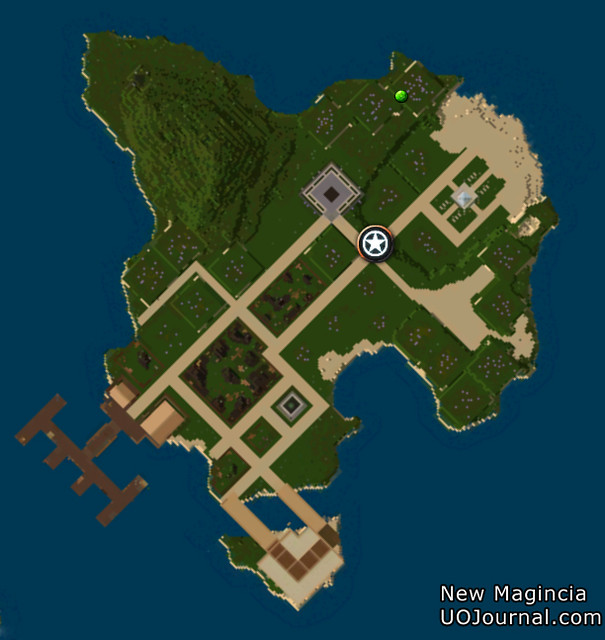 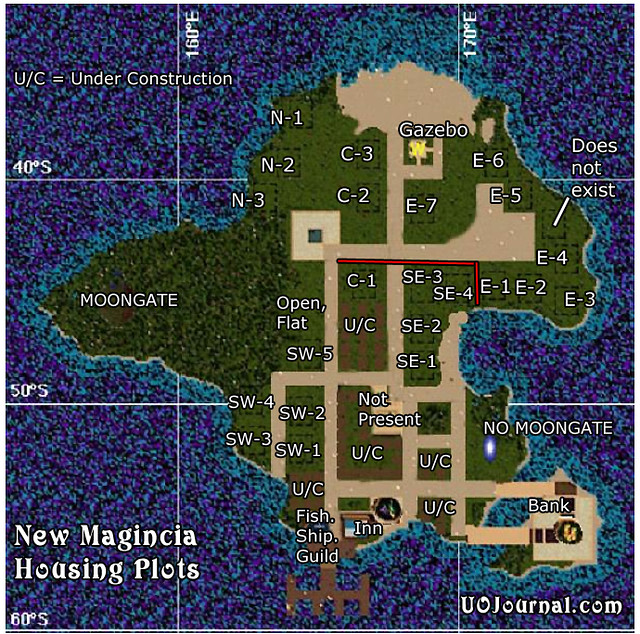 To me, E-3, SW-1, and SE-1 really stand out. E-3 has a great view and SE-1 and SW-1 are probably the best locations for being near everything else.

This is E-3, and it’s also where I ran into Lady Mesanna, who introduced us to Phoenix, the Lead Designer for UO: 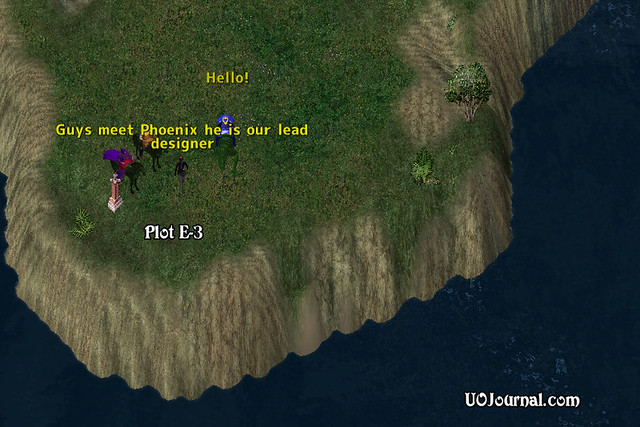 What’s it like to buy a ticket for the lottery? You are buying a ticket for each plot and it looks like you could buy tickets for every single plot. 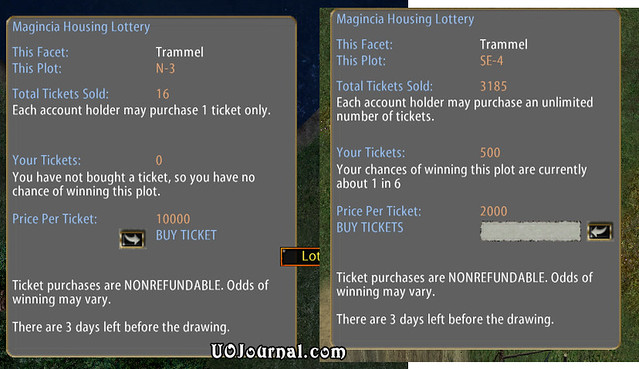 As of now (3pm Eastern, 2pm Central), most of the shards are down and will be for a little bit.

Yes, it’s that time once again, Ladies and Gentleman, when another Publish is being prepped and pushed out. Now it’s only going to be active on Test Center 1 for now, with a backup of Great Lakes in place. Because of the client updates (mentioned a few days ago), all servers must be brought down and restarted. The Classic Client is being patched to version 7.0.13, and the Enhanced Client to version 4.0.13:

Publish 70.0 will be available on Test Center 1 after 4pm today. You can find the publish notes as well as the notes for the Classic Client 7.0.13 and the Enhanced Client 4.0.13 below. This client patch is mandatory, please make sure that you get it! Be aware that this patch is larger than usual, as we are pushing the last set of missing animation files.

We encourage you to check out what’s new and thank you for your feedback.

The main things of interest is that once the shards are back up, we can test out the New Magincia lottery system for the 22 plots per shard that are located in New Magincia. There appears to be a little work being done on the New Player Experience, but it’s probably related more to veterans starting new characters. You can now select where you want to start rather than just New Haven, although New Haven is the default for Young players.

Magincia Plot Lotto
* There are 22 lots each in both Trammel and Felucca. The island is divided up by North and South end. The North end is the area towards the beach area and these plots are 10K per ticket and you are allowed to buy one ticket per account per plot. The South end is towards the bank and these are 2K a ticket and there are no ticket purchase limits.

Magincia Planting System
* Players are able to plant seeds in grassy areas around Magincia by using a hoe. The players will have to maintain the upkeep of the seeds to keep them healthy. Only the owner of the seed can take care of the plant . The plant will be tagged with the owners name and the date he/she planted it. Players will be able to dig up the plants after they have matured and they will continue to keep the player’s name, the date planted and the date harvested.

Abyss Quest and Monsters
* Added a new quest in the Abyss, this quest will start with Xeninfor the Security Advisor and he can be found in the Royal Palace. We have also added a few new mobs to challenge your fighting talents.

Bug Fixes
* Veteran Reward Statues such as the Efreet, Harrower, Therathan Matriarch and the Fire Ant can now be turned off an on.
* The issue with fish that are fished up by a non High Seas entitled account not having resources was fixed.
* You can now fish up the new fish in Shame level 4 with the correct entitlement.
* You should now be able to obtain the Magic Key for the Puzzle Room.
* Faction Traps were removed from Magincia
* Players having a false reading of having a ship placed should be fixed
* Magic Reflection: A Murderer using magic reflect will be flagged criminal if they reflect the paralyze spell back onto a blue character
* Detect hidden will once again detect everyone. Detect hidden will apply out of hide timer to detected players that are freely aggressable.
* Splintering weapons do not lose max durability allowing them to proc infinity without destroying the weapon
* Players cannot parry when wielding a throwing weapon and a shield.
* Players who were stuck in a state where they were unable to place a new ship will once again be able to place ships.
* Magincia is no longer part of the Factions system.
* Scalis Eels will now last a maximum of 2 minutes
* Both facings of the kabuto can be dyed with the Metallic dye tub.

Enhanced Client – Starting Locations
* Players can now pick what part of the world you would like for your character to begin. You will have the option to start in New Haven if you wish. Young players can start where ever they like but the default will still be New Haven.

Enhanced Client – Bug Fixes
* Trading an item from one using the Enhanced client to another will carry over the item’s position in the old backpack to the new backpack has been fixed.

Classic Client – Starting Locations
* Players can now pick what part of the world you would like for your character to begin. You will have the option to start in New Haven if you wish. Young players can start where ever they like but the default will still be New Haven.

So the plan was to roll out the Publish 70/New Magincia to the Test Center tomorrow, using a backup of Great Lakes. That’s been pushed out a day to Thursday, March 17, 2011, however blue crystal owners rejoice, they will be used in the growth and rebuilding of New Magincia. The reason given for the one-day delay is due to some internal testing. The clients will need to be patched, and this will involve a restart and update of all shards on Thursday at 3pm Eastern, 2pm Central. They should be back online within a few hours. Full details:

While the preparation for the launch of Pub 70 to the test center is in full swing, our internal testing on the changes to Magincia require one more day of review. Pub 70 will be available on Test Center this Thursday, March 17.

The client patch for Pub70 requires a server restart. Therefore on Thursday, beginning at 3:00 pm EDT we will bring down all shards. We expect all shards to be back online no later than 5:00 pm EDT.

As an additional note, we have added a purpose for the blue crystals so many players have asked about. They will have a use in the growth of Magincia.

There may have been an additional comment about starting new characters and where their starting location would be, which was tied to the client/shard updates, but it has been removed.

Update: The test has been pushed back to Thursday, however a use for blue crystals is being implemented. Calvin Crowner, the producer of UO, has posted this late bit of breaking news. Ultima Online Publish 70, which should go a long ways towards wrapping up the Magincia storyline, is going to be loaded onto the Test Center this coming Wednesday, March 16, 2011, with a backup of Great Lakes. We will be able to see how the lottery system for New Magincia is going to fully work (more on New Magincia). The period of testing will be extended due to the recent tragedies that have happened and are still happening in Japan, so that hopefully when it is finally published to the production shards, more Japanese players will be able to participate. Given how large of the UO player population is Japanese, I wondered how EA would be handling this. I’ve seen other companies such as Sony suspending billing for people in affected areas.

We will be bringing build 70 to the test center on Wednesday March 16th. As always, we ask that you participate in this test phase and give us your feedback.

However, in light of the events in Japan we will be extending the Test Center phase of this publication. Publish 70 is the end of the live event and the new beginning of Magincia and we want all players to have a chance to participate; and we recognize that there may be many members of our Japanese community who may be unable to participate at this time.

So here is our current release plan for build 70: Test Center Deployment: 03/16. Our expectation is that we will publish to Origin in around 2 weeks. Of course, as events change, we will keep all of the community updated.

We will be putting a back up of Great Lakes on Test Center 1. We hope this encourages you to log in and discover for yourself how the lotto system on Magincia works. In addition to the house plot lotto please enjoy the new system of planting seeds and watching your plants group in the open land of Magincia.

Thank you for your understanding. We are looking forward to getting your feedback and please join us when we say that the hearts and thoughts of our team go out to our Japanese friends.