Yesterday we covered the launch of Ultima Online and today we are continuing on with the quest of looking back at all of the expansions and major events of Ultima Online, as we head towards the 14th Anniversary. That brings us to The Second Age. The Second Age rolled into UO in October of 1998, but a lot happened between the original release of Ultima Online and T2A. I’ve included some specific highlights in this previous post if you’re curious. It must be noted that not long after T2A launched, UO would grow to reach 100,000 players. These were pretty heady times for UO. 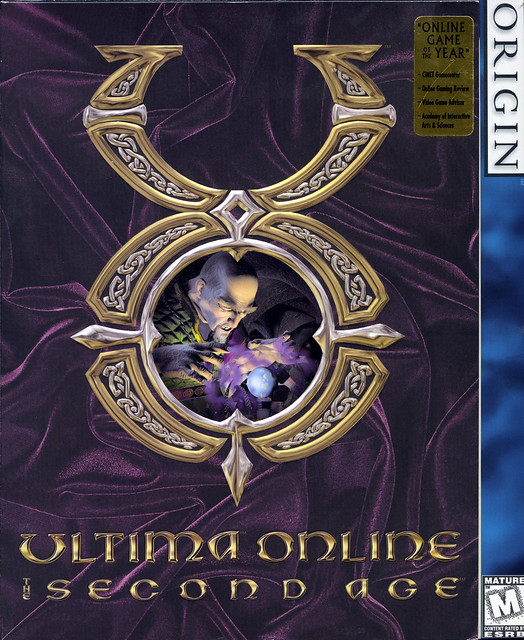 So how was it being sold? With a similar message as the original UO, but adding in all of the accolades it had received (Game of the Year type of stuff), as well as emphasizing the social aspects. It also emphasized things that had been added since the original UO launch – guilds and vendors.

From the back of the box: 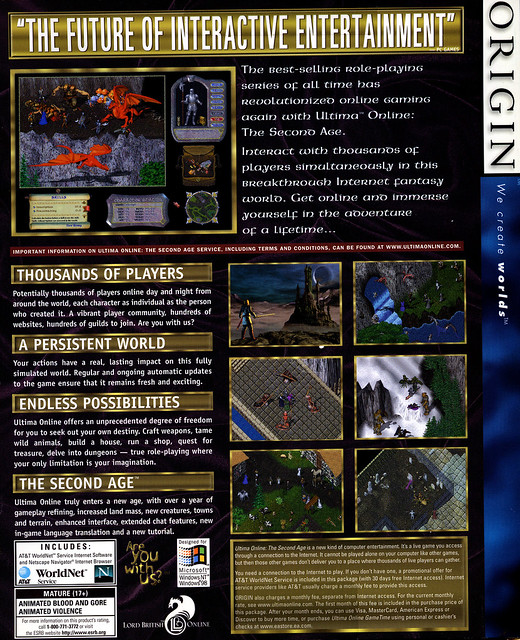 Thousands of Players
Potentially thousands of players online day and night from around the world, each character as indivdiual as the person who created it. A vibrant player community, hundreds of websites, hundreds of guilds to join. Are you with us?

A Persistent World
Your actions have a real, lasting impact on this fully simulated world. Regular and ongoing automatic updates to the game snure that it remains fresh and exciting.

Endless Possibilities
Ultima Online offers an unprecedented degree of freedom for you to seek out your own destiny. Craft weapons, tame wild animals, build a house, run a shop, quest for treasure, delve into dungeons – true role-playing where your only limitation is your imagination.

The Best-Selling Role-playing series of all time has revolutionized online gaming again with Ultima Online: The Second Age. Interact with thousands of players simultaneously in this breakthrough Internet fantasy world. Get online and immerse yourself in the adventure of a lifetime..

Inside the flap/cover of the box, you got a very nice display showing some of what was going on. If you don’t look at this and grin, then you have no soul: 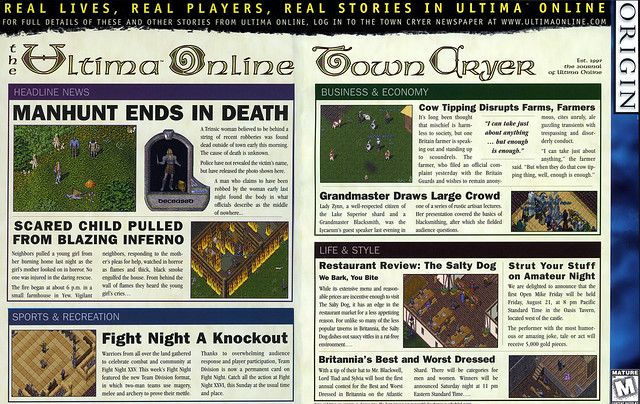 As the first expansion, what did T2A bring? Quite a bit:
* The Lost Lands, a new land for us to explore, with jungles (also new)
* Delucia and Papua
* Better chat features
* New dungeons
* New Monsters
* New language translation for players in-game
* New tutorial
* The Big Window Client

Now “Quite a bit” is very subjective obviously. If you were doing the upgrade price, it was a steal. 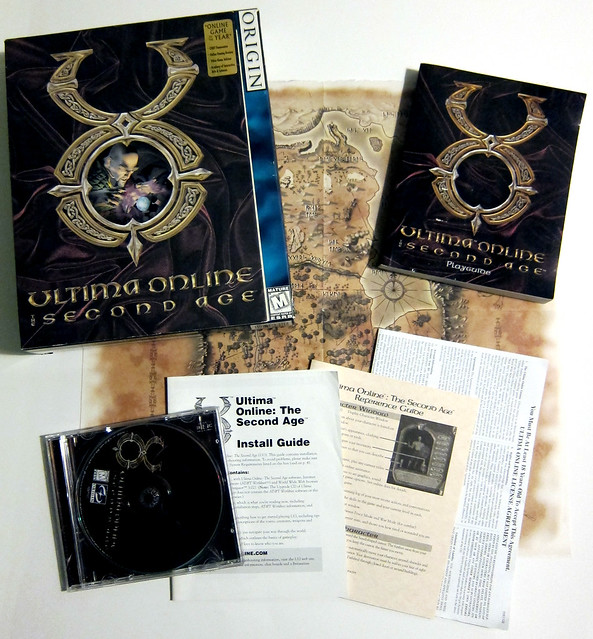 So what about the contents of the box? If you purchased the upgrade, you didn’t get the box, you just got a CD and the guides/documentation – pretty good for I think it was $7 or $8. I picked up a copy of the retail box for another account, which is what I’ve scanned. Looking back at the original UO boxes, retail or charter, the install guide for T2a was actually expanded to explain in more detail the in-game support. The Reference Guide was shortened, most likely because of the Playguide. The Playguide. Simply amazing, probably 150-200 pages, very hefty. Two steps forward, one step back – the map was paper and reversible – one side was the Lost Lands, one was Britannia: 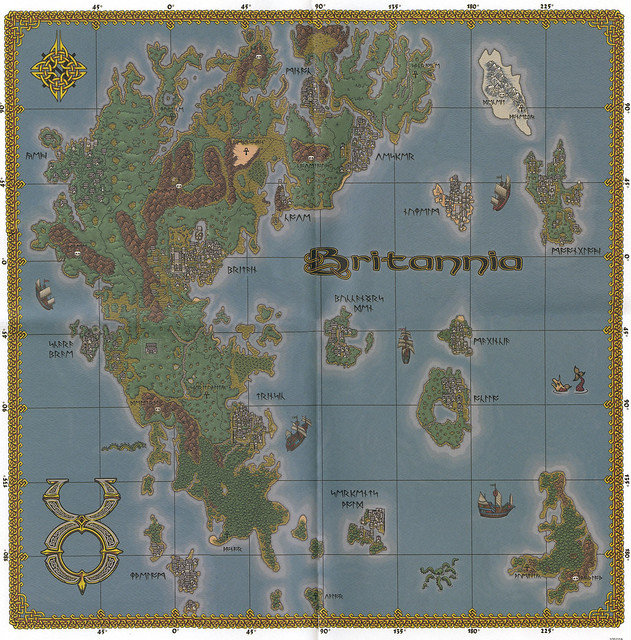 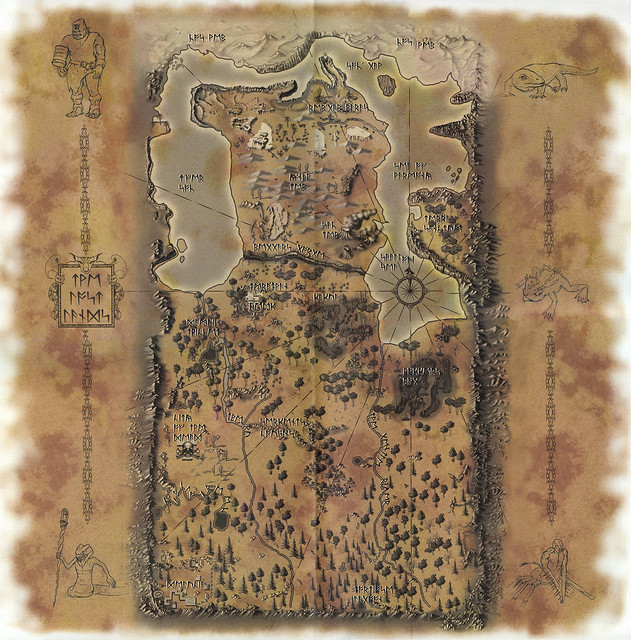 As much as I liked the cloth maps, I don’t have as much of a problem as these were pretty detailed, more detail than you get with cloth, as you can see from my scans above. 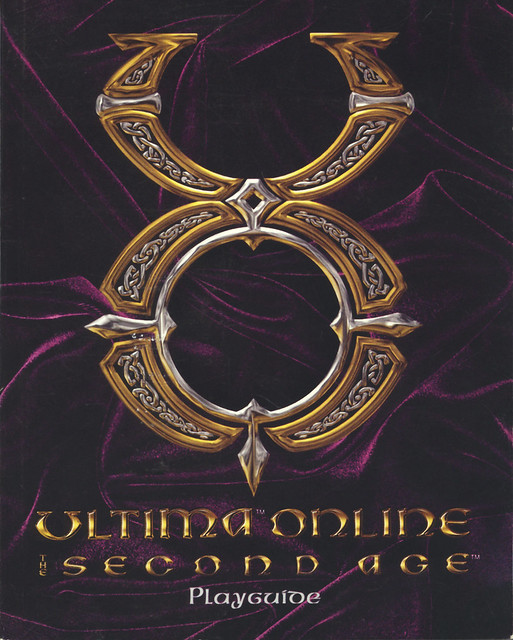 The system requirements went up a bit as well. The basic requirements weren’t that different from the launch, but now that Intel’s Pentium II and AMD’s K6-2 were starting to reach the market in large numbers, and with the improvements made by Microsoft in Windows 98, change was definitely in the air and it was a prime time to upgrade. Woe be to those who had spent a lot of money upgrading late in 1997 only to find Intel and AMD releasing better performing platforms in 1998. I was one of those that had to wait another year or two to have the money available to upgrade, after I had upgraded for the original UO.

T2A gave everybody, even those who didn’t initially purchase it or upgrade to it, the “Big Window Client” allowing players up to have a window up to 1024×768 in full-screen mode. The gameplay window was still small – 640×480 I believe, regardless if you went into full-screen mode or not, but with full-screen mode in 1024×768, you could move a lot of stuff off of the gameplay window. Correction: I’ve been told that it was 800×600 for gameplay. I wasn’t sure.

JC The Builder from UOGuide.com posted this video of gameploy from a T2A demo:


I enjoyed it as an expansion. As I mentioned in the other article, a tremendous amount of work and changes had gone into UO since its launch. I enjoyed the new areas to explore, and I really enjoyed the amount of players that came in, although it wasn’t too long after that UO started to reach some kind of critical mass. Delucia became my main home away from home. It won a few awards along the way, including an “Online Role-Playing Game of the Year” at the Interactive Achievement Awards which is an industry event. A lot of reviews were mixed though. I remember some stating that this was the UO that should have launched. Others were critical over the fact that serious 3D MMORPGs were on the horizon. The media went from being in love with UO to mixed feelings in the span of a year.

While there aren’t many reviews still online, Gamespot still has their review up and gave it a 6.3 out of 10, and in light of New Magincia that was built earlier this year, this is an amusing read from the Gamespot review in 1998:

After we made it into the new world, things improved somewhat. One of the new features in The Second Age is support for player-built cities. Because of this, the only premade settlements in The Second Age are relatively small and sparse. Delucia is a decent-sized town at the southwest corner of the rectangular world map, while Papua is a smaller town of grass huts closer to the center of the map. Someday, player-owned dwellings will fill out these towns and give rise to others, but it’s a little too early to report fully on that aspect of the game. We’re just hopeful that it goes smoother than the messy home building in Britannia. It often seems as if you can’t take two steps in that world without running into somebody’s house.

Adrenaline Vault has their review still up as well.

My take is that if you look at all of the things that were added between late September of 1997 and early October of 1998 before T2A launched, a lot of players would have paid for those things if they had been bundled up into their own expansion pack. T2A was kind of the final polish on all of that to help expand UO’s audience. The reviewers that claimed that T2A was what Origin should have launched with are foolish for ignoring the momentum that would have been lost had UO been in development another year.

Here are more photos from the set, starting with the reference guide: 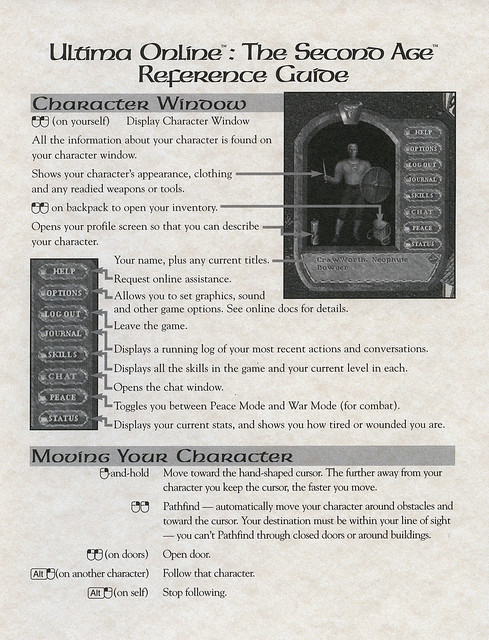 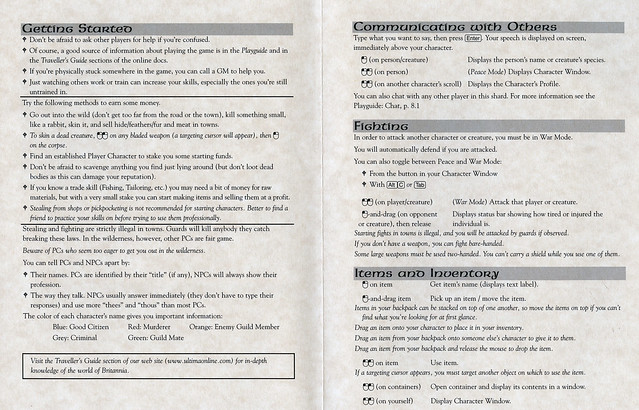 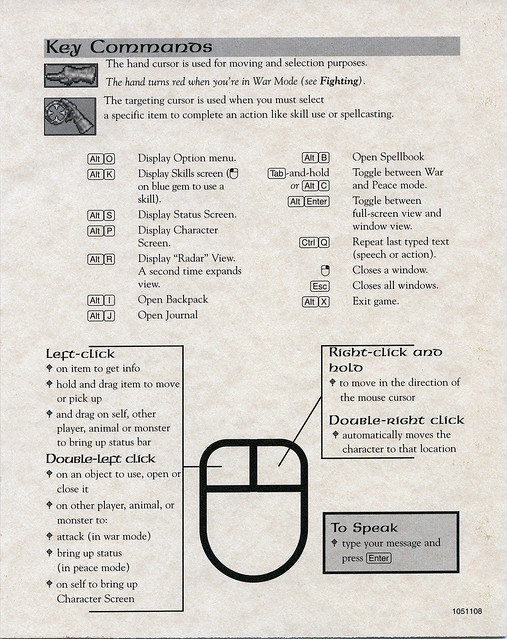 In-Game Support from the Install Guide 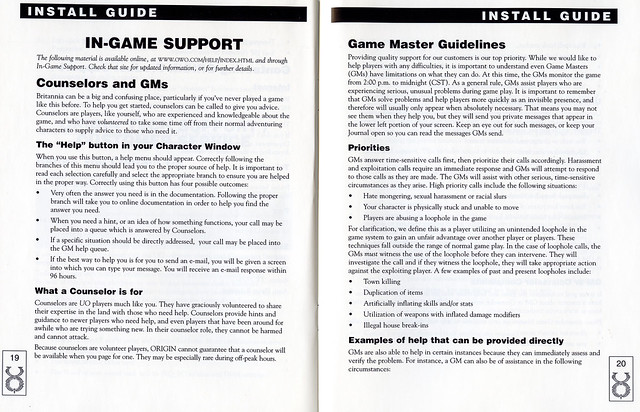 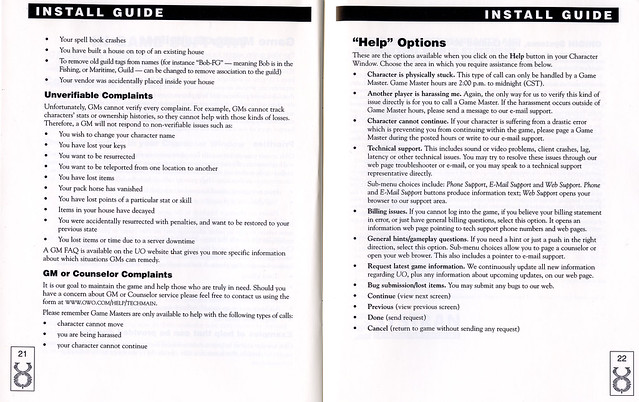 The CD and CD Insets: 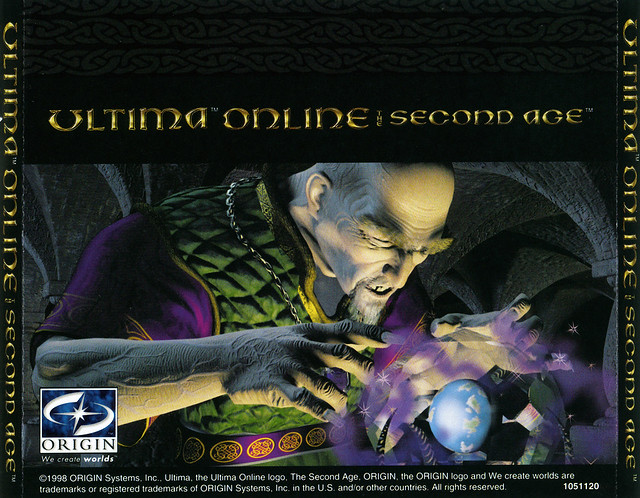 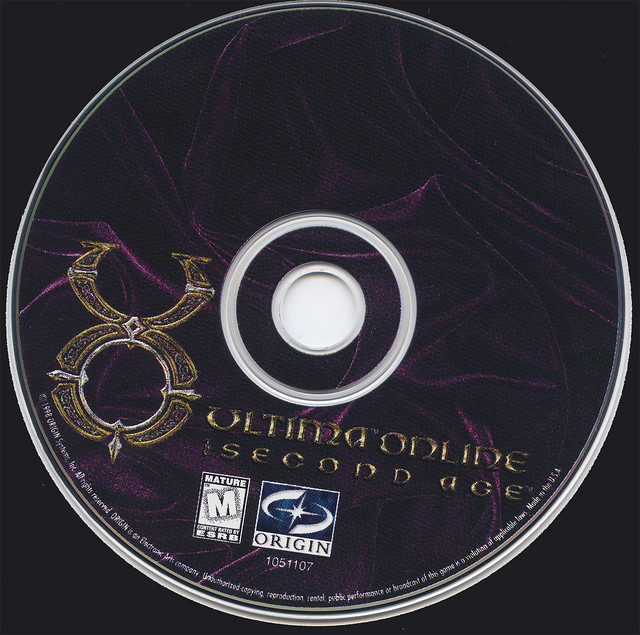 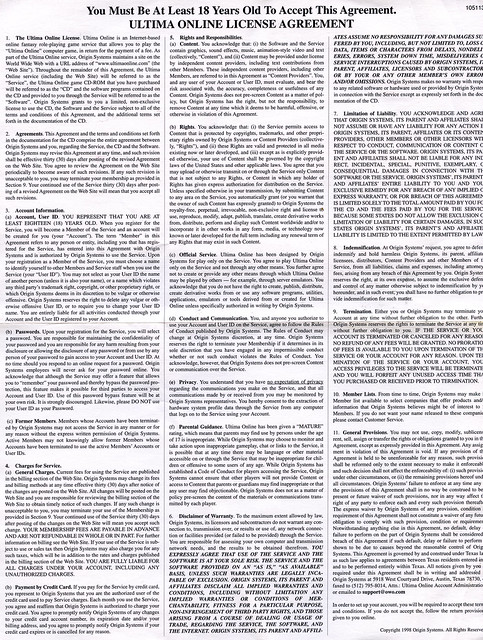 And we wrap up with the Credits: 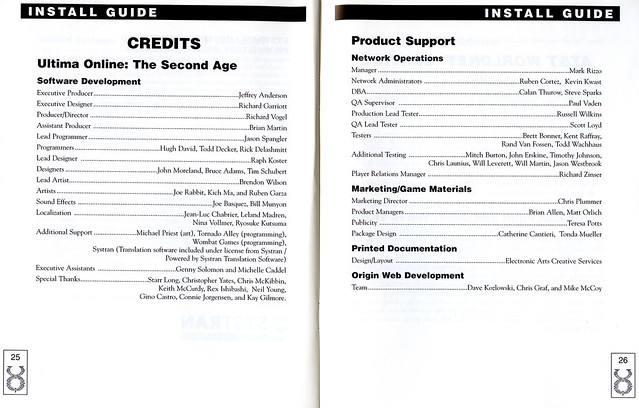 I hope you have enjoyed this, and look for the Renaissance post tomorrow, along with some special photos and scans. If for some reason the images aren’t here in the future, I will be uploading them to UOGuide.com in the future. If somebody wants to do that before I do, please do so! As for usage, all I ask is for a link back to UOJournal.com. If you’d like special sizes for your desktop, iPad, iPhone, etc., or would like to help assemble PDF files, contact me