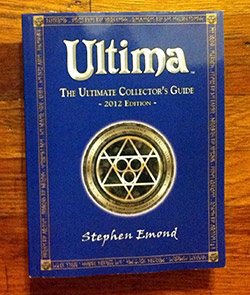 Here are a few details about the UO Ultima Collector’s Guide, revealed in a contest to win said book:

Ultima Online related items will be included in the upcoming UO book (currently in progress and planned for release on UO’s 15th Anniversary). New Ultima items will be featured in an Addendum chapter for the new Ultima Companion Guide, as well as a free PDF download to update the 2012 Ultima Guide.

The Man behind the Ultimate Ultima Collector’s Guide has launched a Facebook contest where you can win a copy and get your name in the book as a contributor, if you can help dig up a few things that might have been missed in the current UCG. He is looking for information on UO as well.

Participation is easy, just “fill in the blanks”. Compiling pictures and detailed information on more than 2000 items was a challenge (as you can imagine), particularly since most of them are quite rare. As such there is still a lot of information left to uncover, or items which fell through the cracks

Additions, updates, and corrections can be about any item listed (or not listed) in “Ultima: The Ultimate Collector’s Guide” – for either the main series or Ultima Online (including the media guide). All submissions will not only help to preserve the Ultima legacy, but also get your names listed as contributors in the next book.

All you need to do is send missing items, pictures and/or information (UPC/EAN codes, page counts, dimensions, etc) to me at: cmdrfalcon@hotmail.com