I didn’t go AWOL. I have a certain amount of time I can devote to UO-related website stuff, and right now that time is devoted to a website that is not UOJournal.com.

But there are things happening, big things. Here are a few of those things.

A new third party program has been approved for UO! It’s been a while.

Ultima Mapper is the new mapping application for Ultima Online Classic and Enhanced clients that allows users to share the entire experience, rather than just their whereabouts.

UO gets its 1,623rd mention on Massive – Do you Miss Player Written Books in MMOS:

Ancient sandboxes like Ultima Online and modern classics like EverQuest II give players the ability to write their own books, which then populate player-run libraries, serve as tavern menus, explain quests, and mark the memory of friends who left the game. Later games, however, have sadly passed over the mechanic.

Another edition of The Yew Times, a break from the normal UO news.

The Awakening – Act II, Part 2 – A continuation of the ongoing story arc.

People who hare having patch issues, read this

And finally, Patch 75! There is so much going on, you just need to read it yourself.

So here’s the video again:

Stratics’ user Tina Small has put together a transcript that was posted on Stratics.

These are some of the things that stood out to me, and that I felt like commenting on.

I’ve already ranted about cheaters and scripters, so this will be a more positive look at the interview.

Focuses, Short-Term Plans, Long-Term Plans
Everything is focused on the 15th Anniversary for now, or rather using it as a kind of a timeline (my words). There is a focus on addressing unfinished systems, long-standing bugs, and revamping old areas. That is good!

New Players – Act like it’s the 15th Anniversary
You know a lot of people are going to show up to your party. If you give them crappy beer in the form of a shitty new user experience, you think they are going to want to come back and party with you in the future? Don’t give them Schlitz or Pabst Blue Ribbon, give them the good stuff that says you are interested in seeing them come back.

And make sure to have at least part of the high resolution artwork update available. A lot of folks are going to be looking at UO, and momma needs a new pair of shoes, or dress or something. You want them to get their foot in the door, but you better give them reasons to keep on coming through that door. 1990s graphics don’t cut it for a lot of potential players. There are people who might be interested in UO who might have still been in diapers when UO was in beta testing. They don’t get excited over the thought of playing Intellivision games and they ain’t going to get excited over UO’s 1990s artwork.

Ultima Franchise
Jeff mentions that there is “Lots of stuff going on”, not just with Ultima Online. At the start of the interview, he mentioned that his job is a lot more than just UO. I know I’m bitching, but we’ve been teased about other Ultima-related stuff for over a year now. I’ve said this before – it’s Ultima-related, and when you play something up for so long without talking specifics, people are going to start thinking that it’s just going to be typical EA – another Ultima project that goes nowhere and is canceled.

Subscriptions:
Jeff mentions subscriptions have climbed. I’m not sure what to say other than to put some money into more artists and into dedicated community relations.

Updating UO to “current” MMO styles
Jeff says no. I agree completely. If I want to play World of Warcraft or Rift, I will do so. UO does need to support modern computers though, namely higher resolution artwork.

Advertising
A question was asked about advertising. From a long-term UO player and MMO player point-of-view, UO is not worth advertising at this point. It needs a new website (UO.com), high resolution artwork, and a better new player experience.

I see this question come up a lot on Stratics and elsewhere. Look, UO gets plenty of free exposure from some very high profile MMORPG websites. Many people who have never played UO are aware of UO. The problem is they take one look at UO and flee in terror, or they go through the trial and are hampered by a shitty new player experience.

Merging Shards
Jeff says no plan to merge servers. I don’t know why people bring this up, it’s a ridiculous question, because you are going to destroy the community of whichever shard or shards are closed or merged. The fairest way to merge shards would be to set up a brand-new shard, and allow everybody from the shards that would be merging an equal chance at house placement, etc., on that new shard which to Jeff’s credit, he brought up.

Jeff understands how disruptive shard mergers is, but it’s a damn shame that some people don’t give a shit about their fellow UO players who are happy on their low-population shards. I would bet a large sum of UO gold that the players who push for shard mergers are not advocating their shards be closed, they probably want other shards closed and those players moved to their shard.

That leads me to this:

We are Not the Future of UO. Hell, We are Barely the Present.
You can’t continue down the road of catering to us older players while ignoring potential new players. I think it was JC the Builder who said that UO producers can never compete with real life. Players are constantly leaving UO, and we are lucky that so many are able to come back and that so many want to come back, but many will never come back. Real life issues such as children, illness, jobs, finances, all contribute to UO players leaving and never returning.

At some point, you have to decide that new players are more important than a lot of what’s going on with UO. There is nothing intrinsically wrong with trying to keep existing players around or bringing older players back, but the resources don’t seem to be there for accommodating everybody. I know that many hundreds of thousands of people have tried UO over the years and then left, but that pool of players who might come back is not as deep as we’d like to think it is.

I leave you with this thought:
We were all new players at one time. It’s time to say that you want to give a new generation of players a chance to walk in our shoes and experience UO. Right now, new players are screwed unless they find a kind soul to help them out.

With so much secrecy around UO’s future plans, you’d think they were adding goddamned panda bears to UO. World of Warcraft is adding pandas, and not only are they not ashamed of it, they seem quite proud of it and want to tell you about it every chance they get. 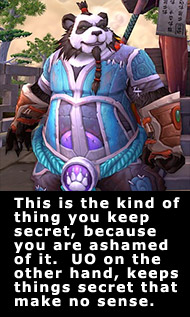 I guess when you bring in so much money, crazy shit like adding pandas as a playable race starts to sound good.

But UO? Far more simple things than a new continent or giving the furries what they have apparently been wanting for years is shrouded in secrecy. There have been too many times where things were kept secret, and when they were finally revealed, we were like “You kept this a secret from us? And here we were worried you were going to add fucking panda bears.”

I went on a rant a few days ago about things that need to be addressed, such as UO and its community as well as UO and its future and what I wanted to see in the producer’s letter.

Things that didn’t need to be said again, but were repeated anyways:

#1 2012 is UO’s 15th Anniversary and there are events planned.
#2 Pub 73 and 74 have been released and pub 75 is in development.
#3 The dungeons are being revamped, one at a time.
#4 UO devlopers, artists, players, etc. are great and deserve pats on the back.
#5 The Origin store needs work.
#6 They want to deal with hackers (do you mean cheaters/exploiters?)

Things that we already know about, and that are useless to tell us about anyways without specific examples:

Publish 74 is out and about on the production shards, yay! If you want to read the full list of changes, check the UO Herald.

I’m just going to give a brief rundown.

Valentine’s Day is nearly upon us. We’re getting cupid statues and cupid arrows. You can tag your true love or the object of your stalking, I mean desire, with these arrows.

A major live arc/storyline is starting up. We’ve been getting hints for a while now – the town loyalty, the rioters. It starts in February is set to run through at least September, and involves both the main UO team and the EM team, and is meant to lead to the 15th Anniversary.

Bulk Order Deeds (BODs) are getting a makeover. NPCs will now cache up to 3 BODs a day for players. All BODs are limited to obtaining a new one every six hours, regardless of crafting skill. You can now bribe NPCs that give out BODs to get even better BODs. I’m not sure what to think of it, since I see both sides to argument – that it was a pain in the butt to obtain certain types of BODs, but on the other hand, I can see the bribery prices going sky high, putting certain BODs still out of the reach of a lot of players. It’s a gold sink, and it will definitely lighten some peoples’ bank boxes.

I’m not going to talk about the Runic Re-Forging – you really need to read the UO Herald publish post about it. It’s interesting, but not something I have time to check out and comment about.

Continuing in the series of dungeon revamps that started last year, Wrong has been revamped! Very happy about this. The New Loot Generator applies to Wrong. The mobs are tougher, there are escort missions to gain Compassion rapidly. The Prison of Nightmares has been added – you’ll have to try this one for yourself. New stealables have been introduced for the thieves out there.

Looting rights distribution has been changed, and healers are included equally, assuming they act as they should.

Some Bard changes were made – I don’t have an active bard character so can’t really comment on those.

Finally, there are a lot of bug fixes. Again, read the UO Herald post for more information – too many to list here.

Overall thoughts
A lot of work has went into Publish 74, and at the same time it seems to have come together fairly rapidly. It’s a good sign, and there is clearly a lot of work being done to rework current systems, in addition to the dungeons. The numerous bug fixes are also a good sign.

Would like to have seen information about the high resolution artwork update to the Enhanced Client.

He has put together two very detailed guides to certain parts of his interface. One covering Hotbars, which are flexible/customizable bars that you can use for all kinds of things.

The other is for agents, and it’s very useful for those who grew accustomed to UO Assist. Agents include Organizers – moving items from one container to another, undressing – moving items from your character to a contain, restocking which is exactly what it sounds like. There are also automatic buy and sell agents.