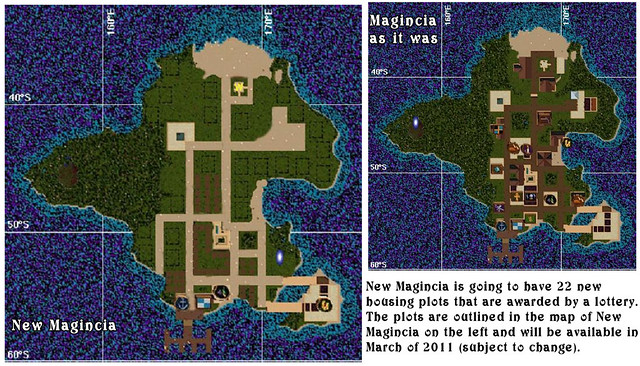 There you have it. A document has been published (UOHerald.com) outlining the upcoming changes with Magincia, along with a new map showing the housing plots (click the image above for a full-size version). It matches up with what we were told during the UO House of Commons recently, and now we have more details. If you want to download the PDF file from the link provided on UOHerald.com, it is here.

If you want a better look at an older map of Magincia before it was destroyed, head over to Ultima Online Travelogues and Adventurer’s Guide or to the UO.Stratics.com Atlas – Magincia.

What buildings might remain?
* The Stag and Lion Inn. There is a location for it, and it would be odd for them to not have an Inn available for players to log out in that don’t live in Magincia.

What buildings/locations are being added?
* 22 housing plots
* A gazebo for player/EM events

Other areas that are “under construction” or zoned to be commercial, as Cal mentioned a commercial zoning in the HOC, that will be utilized later on, possibly for the vendor bazaar (more information).These are probably the areas you see that are marked off with brown patches. In the HOC chat, they were mentioned as being fenced/marked off. The original buildings affected are:
* Stichin’ Time (Tailors)
* Magincia Healer
* Magincia Magicka (Mage shop)
* The Stag and Lion Inn
* The Bread Basket (bakers)
* Great Horns Tavern (being moved)

Summary
* 15×15 plots, plots can be smaller, but not larger
* Each plot has a unique feature adjacent to it
* 11 plots (northern) are on a per-account basis, one entry per account, 10,000 gp per entry.
* 11 plots (southern) are based on however many tickets you buy, 2,000 gp per entry
* “Writ of Lease” is issued to the winners
* “Writ of Lease” can be transferred to others
* If it’s not placed within the 30 days, the land changes to normal house placement rules
* No grandfathering – if you win a Writ of Lease and place it, you will lose any other houses on that account.
* Public Gardens are going to be available in several areas within and just outside of Magincia, where players can till the soil, plant plants, and will be able to harvest named plants (players name, location, date) as decorative plants. Growing plants will function basically the same as doing it in a player’s house.
* Plants can’t be created near structures or be placed too densely.
* Players can only till one plot of land in Magincia per four days, unless the last plant they cultivated died.

UOJournal.com notes
* The Moongate has been moved to the location of the former Baker’s Dozen shop which puts it near the new bank. Not a bad move in my opinion.
* In an effort to keep it from becoming Luna II, they appeared to have removed a lot of NPC shops that are found everywhere else, which will not exactly help it be popular to anybody who doesn’t live there. It’s possible some of those shops will come back in the construction areas. Cal referred to those areas as being zoned commercially. It could that they want to see how things work out with the vendor bazaars as far as whether they fill the needs of the NPC vendors or not (reagents, etc.).

I’m not seeing any mention of whether normal vendor rules for the houses will be in place. Those with a lot of money will be able to basically buy the southern plots near the bank/moongate since they can enter as many times as they want to. I know they don’t want this to become Luna II, but the conditions are ripe for it to become Luna II. Furthermore, if those zoned off areas in the south are the site(s) of the vendor bazaar(s), which will be up for bidding to the highest bidders, the richest players in the game will control southern New Magincia. It doesn’t exactly match up with the whole Virtue of Humility thing that’s a part of the Magincia back-story. Even if they restrict it to one housing tile set, there will be plenty of really ugly barebones housing plots that serve only to showcase vendors.

On top of all of that, there is the issue of this being tied to the mini-booster, since they appear to require a booster of sorts, at least for the vendor bazaar.

I have a bad feeling about this, but at this point I just want it over so that the UO developers can move on to other things.