March 2012 – All of this outdated stuff is being moved to another UO project. Shhhhh….

Virtuebane
The current Ultima Online story arc revolves around Virtuebane, who was introduced to us in late 2007, with the fall and destruction of Magincia. He is a part of Ultima lore, fulfilling a similar role. He is the leader of the aptly-named army of the Bane Chosen, and is a demon lord, a horned demon lord, as you can see from the picture on the right (thanks “WM”).

Virtuebane has been fighting for control of Sosaria, against the Ophidians, Meer, and Kingdom of Britannia, and is seeking the Crystal of Duplicity from Britannia. He is responsible for the outbreaks of Blackrock Golems that have plagued Britannia since then. 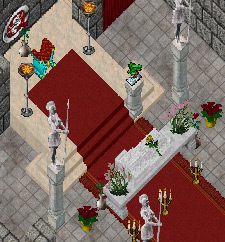 Articles related to the current story arc:
* Queen Dawn is Laid to Rest, Virtuebane Appears
* Final Resting Place of Queen Dawn
* The Death of Queen Dawn, from nearly the start to the finish

(We apologize: Many of our stories related to the current storyline are offline as we move the images over to the new server)