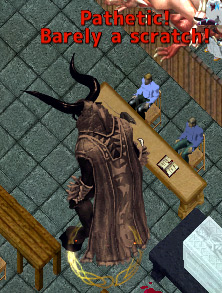 Tonight, on the Lake Superior Shard, Queen Dawn was finally laid to rest. We gathered together at Castle Britannia, and were then taken to the Court of Truth in Yew.

We heard Queen Zhah speak of her friendship with Queen Dawn. Lancepesade Kimmel and 2nd Lieutenant James R. also spoke of Dawn and shared some of their memories and her virtues. The 2nd Lieutenant seemed a little closer to Dawn than most people who worked with her…

Ricardo and Avery were there at the Court.

Ricardo was…busted, you might say. Virtuebane murdered Ricardo right in front of us, and removed an item. We then spent several minutes trying to defeat Virtuebane, to no avail.

I will be bringing full video and a transcript of the memorial services for Queen Dawn later this weekend.

Oh, we had a special friend show up: